Get the Run Down # 3 Full Metal Panic! 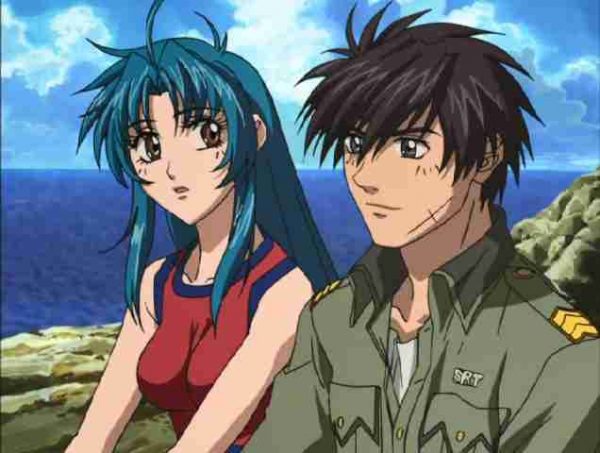 Kaname and Sosuke fishing together. Episode 5 at 4m 45s.

Without even hearing the last part of the name most anime fans already assume that “Fullmetal” refers to Fullmetal Alchemist. However, one year before FMA releases another anime debuted with a similar name called Fullmetal Panic”.
Despite having similarities in their names the two shows could not be any more different from one another. In Fullmetal Panic, “Fullmetal” refers to the mechs called Arm Slaves which are gigantic exoskeleton suits used by many military organizations (mechs).
The “Fullmetal” in FMA refers to the alchemist known as Edward Elric and his Automail leg and arm. FMA has monopolized the name at this point. Even though Fullmetal Panic Invisible Victory debut in 2018, anime fans’ apathy for this series continues.
FMP has several anime adaptions including the first series released in 2002, Fumoffu in 2003, The second Raid released in 2005, a side story OVA in 2006, and some recap movies that aired from 2017 to 2018.
While recap movies were recent it was still the same old story. Finally in 2018 Full Metal Panic! Invisible Victory was released. It’s great to see this series is getting some love after all these years.
Gauron the main antagonist and known terrorist is after Chidori. Why we are not entirely sure but she has something of value that he wants. Mithril aware of this sends a team of their finest Sousuke, Kurtz, and Melissa
Chidori is in high school and since Sousuke is around the same age he is the perfect candidate to go undercover. Sousuke has only known life on the battlefield and is unfamiliar with school life. This leads to funny moments of Sousuke acting like a fish out of water. Despite the workload of high school, Sousuke is not exempt from his military duties. Thus he leaves every so often to complete missions for Mithril.
Sometimes these missions involve protecting Chidori which creates very complex and interesting scenarios. Can Sousuke balance his military duties with high school life, will Gauron succeed in capturing Chidori and what is his ultimate plan?
Well to find out you are going to have to watch it.
This anime is really two shows in one. A high school awkward romantic slice of life and a mecha military war drama. I enjoyed how the series separates the two parts while also brilliantly combining them in often creative ways.
The war scenes are intense especially when you consider that Sousuke has to go to school the next day. Armslaves have such subtle details and are fun to watch in combat.
Full Metal Panic is a great gateway anime for new fans combining several genres in hilarious and action pack adventure.

Common Answers to Important Questions about this Anime

The art style is great and the team went all out on the Armslaves and the TDD-1 which is Mithril’s mobile base. There is CGI but it’s mainly used for the TDD-1 submarine and does not hurt the experience.
The character models and designs are like other anime made by Gonzo including Black Cat and Chrono Crusade. The style is definitely dated but still holds up well after all these years.

The anime combines high school and war so you do get your fair share of action scenes.
Armslaves the mechs in the series play the largest part in these action sequences.
There is also gunplay as these are mercenaries fighting terrorists, I mean it might come up.
Mech to mech fighting is done on the ground only so no space battles or dog fights in the air.
You can find a similar style of action in Patlabor, Neon Genesis Evangelion, and Big O.

There is a romance that blooms between Sousuke and Chidori. It takes second fiddle to the plot and never really develops until later series in this anime.
If you are hoping for some growth between the characters as an incentive to watch, the show will not disappoint you.

Melissa and Chidori are the two sources of fan service here. Both get in situations where they are wearing little to no clothing. There is even a part where Chidori is naked but it’s only once and in context to the story makes sense.
Only a few times in the anime did these “fan service” scenes distract from the plot.
If you hate lewd fan service there is not enough in this anime to deter you from watching.

Exposition is not a main part of the anime. The majority of the conversations are simple and direct. So if you are looking for debates/ discussions on the meaning of life or other philosophical ideas this one is not for you.
Andrei Sergeivich Kalinin might be the only character that discusses these topics. As he is a strategist to the young Testarossa who leads mithril.
Full Metal Panic prefers to have the visuals and actions do the talking.

This plot is easy to follow there are key developments but as long as you pay attention you should have no issue following it.
<div class=