What Made Nausicaä of the Valley of the Wind so Awesome?

“A thousand years have passed since the collapse of industrialized civilization. A toxic jungle now spreads, threatening the survival of the last of the human race.”

We hear these words after Lord Yupa leaves another village consumed by the toxic spores.

This is how the film introduces us to this terrible future.

Humanity is on the brink of extinction and its future is the hands of the unlikeliest of heroes.

Nausicaä of the Valley of the Wind is one of the first films directed by world-renowned Hayao Miyazaki.

The film hit theaters in 1984 and the success led to the creation of Studio Ghibli.

Disney’s version outshines the New World Picture’s version (Warriors of the Wind) because it had no cuts.

Of all the Ghibli films and Miyazaki films, this one is my favorite.

Let’s get started with the analysis of the film.

Nausicaa is the main character the protagonist of this story.

She is the princess of the Valley of the Wind hence the title of the film.

Nausicaa’s character affected me the most and is the best part of this film.

She has many great traits including:

It amazed me that Nausicaa’s “male” dominated traits did not overshadow or replace her “female” ones.

I relate to her love and compassion for the planet and all living things on it.

She uses this love to fuel her acts of bravery throughout the story.

But let’s not forget about Nausicaa’s Intelligence which also an important character trait.

Almost by accident and with the desire to save her father Nausicaa figured out why the jungle is toxic.

It all came down to the soil, not the trees and in fact, trees could be grown to produce non-toxic spores.

I wish the film had come back to this moment later on but the discovery alone was impressive.

Currently, everyone believed that the forest is toxic and the only solution is to destroy it.

In reality, there could be a way to coexist and grow non-toxic trees.

Nausicaa is explaining the real cause of the toxic forest

Nausicaa belongs on a top ten list of the most relatable characters in anime.

I relate to her ability to hold her beliefs even if leads to conflicts with other people.

She stands alone a lot in these conflicts and sometimes even among her own people.

My lifestyle choices tend to conflict with modern society and I often have to defend myself.

Sometimes it’s can be one vs many in this conflict but regardless I stand my ground.

Nausicaa is the princess in her “kingdom” but due to her father’s illness, she is practically queen.

She can handle the pressures of leadership at such a young age.

Even when missteps occur she can bounce back and regain her composure.

Thankfully Lord Yupa was able to calm down Nausicaa and stop the fighting.

She stopped her people from fighting with the Tolmekians after regaining her composure.

So yes she lost control but was able to calm down and make rational decisions.

You could even argue that Nausicaa’s reactions were completely understandable given what happened.

Nausicaa was kind to these girls even though she was in a hurry.

Nausicaa’s greatest leadership quality is that she treats everyone with respect and dignity.

She genuinely value’s everyone and does not brush people aside when it’s convenient.

This is something that I appreciate a lot and I know that I am not alone on this.

Nausicaa demonstrates this many times in this film here is my favorite example.

Before leaving as a hostage with the Tolmekians three young girls go to Nausicaa in tears.

Despite the guards rushing Nausicaa to get on the ship, she takes her time gives them a hug and a thoughtful goodbye.

Nausicaa is not afraid to put herself in harm’s way to help her people.

This inspires loyalty because everyone knows that Nausicaa would not give orders that she would not do.

She leads by example. Here are two great examples of this.

She took off her mask and breathed in the toxic spores to convince her men to dump their cargo.

Despite smiling at them she was actually in real pain.

Towards the end of the film, Nausicaa was with the baby Ohmu and they both stood before a stampede of Ohmu.

Nausicaa knows this is suicide but does this because she wants to protect her people.

Nausicaa hugging the Baby Ohmu after it heals her

Some of the main themes in this film include veganism, anti-war, pro-environment, etc, etc.

This film expresses social commentary with the conflict between Humanity and the Ohmu.

Humanity as tried to remove the bugs thinking it is the solution to the problem.

Ironically enough it is actually the opposite and the bugs are trying to save the planet.

Only Nausicaa and her people realized that living in harmony with the bugs is the path to survival.

I think the message from this is clear and the symbolism is obvious.

If humanity hopes to survive we have to live in harmony with the planet and its inhabitants instead of destroying it. 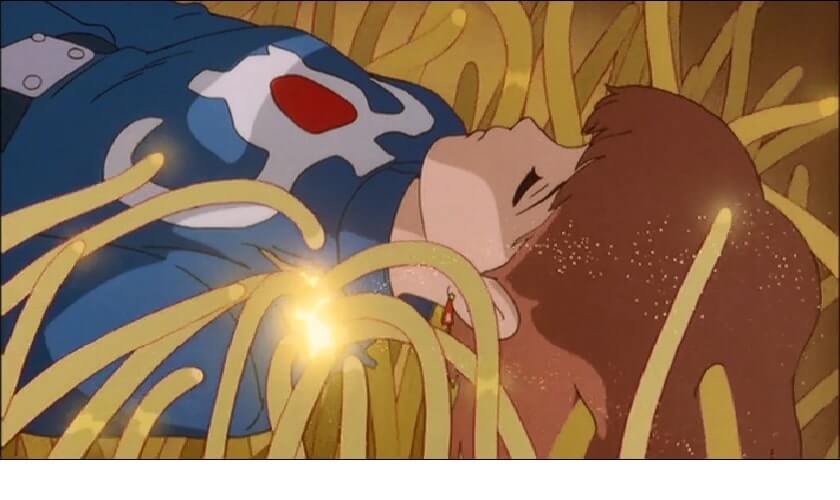 Of the large bugs, the Ohmu are the first we meet.

If you asked me what I thought of them after the first ten minutes.

The response would be they are terrifying, angry, and mindless creatures.

But as the film progresses we start to learn more about the Ohmu.

These creatures prove that they are intelligent, compassionate, and show forgiveness.

The Pejites captured a baby Ohmu and punctured it with nails to attach it to a flying device.

They did this to lure out the entire herd of Ohmu.

After Nausicaa saves the creature it heals her bullet wounds and burns from the acid water.

The Ohmu is first shown as an angry creature

After the stampede, the rage in the Ohmu stops and they heal Nausicaa.
The entire herd returns home with their baby as fast as they arrived.
The Ohmu only became enraged when they home or children are under attack something we can all relate to.
Ohmu demonstrated their ability to understand English and interact with the subconscious of other living things.
<div class="" data-block="true" data-editor="911bm" data-offset-key="4f1h2-